Mediation “Mediation is a voluntary, multi-faceted, and confidential process in which a mutually-selected, impartial mediator helps people involved in controversies to reach an outcome of their own making, which may include the resolution of issues and the preservation of vital relationships. Mediation has the broadest application and the greatest potential for resolving disputes and reconciling conflicts.” (www.aaamediation.org)

Andrew Berg is certified by the American Arbitration Association as a mediator in the area of labor and employment matters.

Arbitration “Arbitration is the private, judicial determination of a dispute, by an independent third party. An arbitration hearing may involve the use of an individual arbitrator or a tribunal. A tribunal may consist of any number of arbitrators though some legal systems insist on an odd number for obvious reasons of wishing to avoid a tie. One and three are the most common numbers of arbitrators. The disputing parties hand over their power to decide the dispute to the arbitrator(s). Arbitration is an alternative to court action (litigation), and generally, just as final and binding (unlike mediation, negotiation and conciliation which are non-binding).” (www.aaamediation.org) 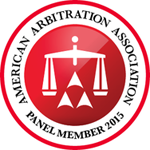 Thank you for contacting us. We will get back to you shortly.

Please complete all required fields below.

1350 Division Road
Suite 102
West Warwick, RI 02893
(401) 274-0113
(401) 315-9774 (fax)
The Rhode Island Supreme Court licenses all lawyers in the general practice of law, but does not license or certify any lawyer as an expert or specialist in any field of practice. This site is designed for general information purposes only. The information presented at this web site does not constitute legal advice. Use of this web site does not create an attorney/client relationship between the user and Sammartino and Berg LLP.
Contact Us Today